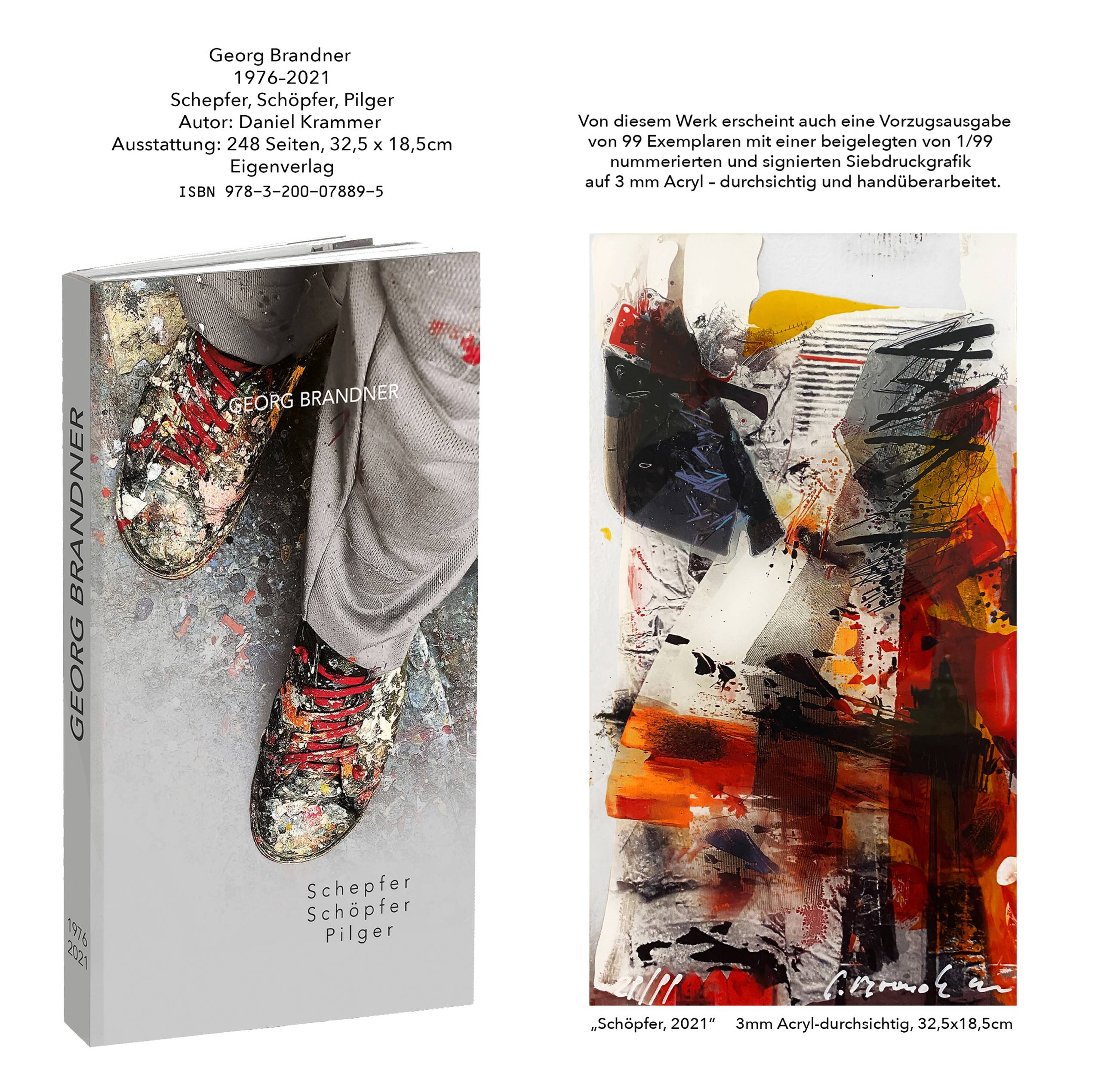 In this book, the freelance artist Georg Brandner looks back on his 45-year career as a painter and object artist. In the process, he reflects on his oeuvre in terms of the three main themes of “Workhorse, Creator and Pilgrim”.

At the end of 1976, Georg Brandner decided to embark on the path of a painter. Originality and his ardent passion also prompted his decision to go to Paris – a city that transformed him as an artist and to which he often returns. His constant drive to create has guided his work to date. A fiery red colour has accompanied him along the way.

Transformation as continuous change; a unity of the idea and composition invigorates the flow of Brandner, the workhorse.

In the years that followed, he cultivated an artistic idea, which – through his incessant productivity – gave rise to a unity and flow that cemented the gestic and informal value of the artworks. An unmistakable kind of abstract expressionism has emerged as a guiding element of his style. Georg Brandner is an incessantly prolific artist – art is created with every journey.

As a result, the workhouse becomes a creator, through the power of unmistakable originality, which develops and establishes itself from his drive to create.

From the subtle unity of free flowing ideas, Brandner creates by drawing from the whole of stylistic change. He decontextualizes his fundamental understanding of painting and also cultivates a sculptural work towards painting, which incorporates itself, in a conducive manner, into the oeuvre and becomes an integral part of the form and material used by Brandner. The use of a wide range of materials is apparent as an extension of the artist’s colour palette. His collages are a means to an end for painting. The resin and glaze layers offer a glimpse into the intangible behind the pure technique. The result is an unobstructed glimpse into the artist’s fundamental understanding of painting.

“Schepfer” (Workaholic) is a term from the Styrian dialect, which roughly means “passionate worker”.

Just as the painted works of this versatile artist have many different layers to be discovered, deciphered and perceived, so too does it embody in the work as a whole a kind of outer silk, which extends to canvases through pigments and versatile multifaceted glazing techniques or can be discovered in clay, metal and glass, not to mention other solid materials as a highly active passage into the art. It is a kind of subtly flowing materiality, which guides one’s gaze into the work and the skill, with which the artist crafts a colouring of light and composition from his impressions.

In this respect, the lightness of the painting layers and collages alone do not offer full insight into the depth and purpose of the work, which Brandner develops as a workhorse and creator.

For this, a story of connection across cultures takes place. Should one inquire into the glue holding the fragments together, one uncovers an impression of fruitful difference, a free and open idea of intercultural connection on the basis of freely resolvable culturally linked moments spread across the continents. Brandner embarks on a pilgrimage around the world where the idea of fluid cultures and borders exists. The clearer this idea becomes, the more one understands the abstract content of his work, which offers expressive access for keen observers to form their own personal idea of what is freely hidden in the heart of the artistic statements and what is arising beyond the artist himself.

Reflection and taking responsibility oneself may very well be the values rooted deep in the independent, personal interaction with the work of Brandner the pilgrim. One question remains as its specific content is not tangible as an idea of continual transformation – the art takes on its own life.

As a transition to the work, the example of “glass” can be used to illustrate a relationship that later introduces one to the artistic dimension of this book. On one hand, it is sensitive and fragile, on the other robust and stable. Tension is its intrinsic value and, between that, there is no consistent unity that can combine these components with one another. As a result, only the transparency of this amorphous process remains in order to also demonstrate in this respect the tension and wilfulness of the works presented and show them in full expression and humility.

This site uses cookies. By continuing to browse the site, you are agreeing to our use of cookies.

We may request cookies to be set on your device. We use cookies to let us know when you visit our websites, how you interact with us, to enrich your user experience, and to customize your relationship with our website.

Click on the different category headings to find out more. You can also change some of your preferences. Note that blocking some types of cookies may impact your experience on our websites and the services we are able to offer.

These cookies are strictly necessary to provide you with services available through our website and to use some of its features.

Because these cookies are strictly necessary to deliver the website, you cannot refuse them without impacting how our site functions. You can block or delete them by changing your browser settings and force blocking all cookies on this website.

We also use different external services like Google Webfonts, Google Maps and external Video providers. Since these providers may collect personal data like your IP address we allow you to block them here. Please be aware that this might heavily reduce the functionality and appearance of our site. Changes will take effect once you reload the page.